Laparoscopic surgery has become one of the predominant ways to operate on patients. In this form of surgery, surgeons are not directly looking at the patient. Rather, surgeons look at a mediated image of the patient’s body cavity as recorded by a camera (a laparoscope) and displayed on a screen. These screen-based operations pose new kinds of opportunities and challenges for visual attention and communication during operations. Also scrub nurses, who are in charge of instrument passing to surgeons, usually gaze at these screens. Yet, less is known about the role of the screen for these nurses. Do the images displayed on the screen have the same “significance” for nurses as they have for surgeons? 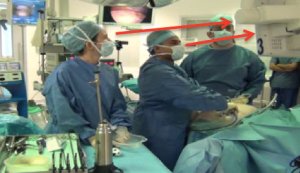 Clearly, instrument passing from a scrub nurse to a surgeon requires monitoring of the operation. Specific instruments are needed at different stages of the operation, and the nurse is expected to know the operation and the procedures involved well. They are often expected to remain one step ahead of surgeons, who might not always say what they need (but, for example, put their hand out while expecting an instrument to be passed). In laparoscopic operations, then, does the scrub nurse determine the timing of instrument passing from the images seen on the screen? This issue has to be re-examined carefully, as scrub nurses’ training rarely involves explicit instruction about how to follow a screen-based operation. Through an analysis of video recordings and a detailed transcription of instrument passing episodes, I have found that before a nurse presumably “realises” that an instrument should be transferred to the surgeon, they orient to the subtle movements of the surgeon – for example, the surgeon’s posture shift – that occur in the nurse’s peripheral vision. As such, the laparoscopic images might not be the only source of information for the scrub nurse, even so if they are ostensibly gazing at the screens. “Body reading” is just as important. 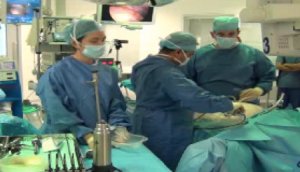 Here the nurse drops her gaze from the screen in response to the surgeon’s posture shift towards the patient. Shortly after, the nurse passes a syringe (in a dish she is holding) to the surgeon.

Follow Multimodal Communication in the Operating Theatre on WordPress.com